There are some days when I almost regret having given Arthur Lough my cell phone number. When he called me last Tuesday to ask if I would like to attend the annual dinner of our local ministerium, at which he was to be the featured speaker, I thought that might 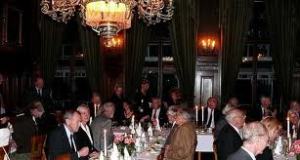 be one of those days. Turns out I was very, very wrong.

“How long have you known about this gig?” I asked him, before I responded to his request.

“They just called me about an hour ago,” he said. “Their scheduled speaker has fallen ill, and they are desperate for somebody to fill in. I think I was the third or fourth call they’ve made. Nobody is willing to take the assignment on such short notice.”