For most of my life I gladly identified with the subset of Christianity known as evangelicalism. That was the community in which I had come to faith in Christ, the context where I sensed a call to vocational ministry and began the years-long program of study by which I hoped to prepare myself to fulfill that call.

I liked the word evangelical. Basically it was the English transliteration of a Greek word, euangelion, which essentially meant “good news.” That Greek word is generally translated “gospel” in most English versions of the New Testament, and the word evangelical seemed to say that the people who claimed that designation must surely have a clear and comprehensive understanding of the Gospel.

I believed that for more than forty years of vocational ministry. I don’t believe it anymore. Oh, I still believe in the gospel, the good news about Jesus and what his life and example and teaching can do for the world. I just don’t believe that American evangelicalism is a very good example of it.

Neither, I think, does Lisa Sharon Harper, although she is far gentler and more diplomatic in making that point than I was in the sentence above. She has thoughtfully addressed what she calls the “thin” reading of the gospel, so prevalent in much of American Christianity, and 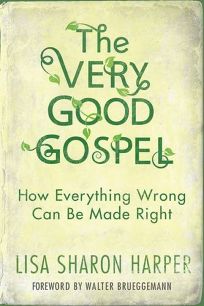 offers a fuller, more nuanced, more biblical way to understand the gospel in her new book, The Very Good Gospel: How Everything Wrong Can Be Made Right (Waterbrook, 2016).

In her very first sentence, Harper—who serves as chief church engagement officer at Sojourners, the DC-based organization founded by Jim Wallis and committed to justice, peace, and environmental stewardship—summarizes her reason for devoting years of her life to writing this important book. There must be more to the gospel, she writes. I know what she means.

Like so many others brought up in evangelicalism, I share Harper’s concern that the gospel has been reduced, in too many quarters of the American religious community, to a formula for believing certain prescribed doctrines in order to pass the test for orthodoxy and qualify for admission to heaven after death. She counters that view by suggesting that the gospel is essentially the truth that God wants to restore shalom to the earth.

Shalom is a Hebrew word generally translated “peace” but actually possessing a far richer and fuller depth of meaning. In addition to “peace,” Harper reminds us, shalom conveys the idea of well-being, wholeness, abundance, and the perfection of God’s creation. The message of the Bible, then, is that God wants to restore harmony to all aspects of creation. As Harper writes, “At its heart, shalom is about God’s vision for the emphatic goodness of all relationships.” That includes the relationship between humans and God, but it extends much further to include broken and dysfunctional families, the scourge of racism, economic inequality, exploitation of natural resources and the environment, and hostility between nations.

This is a thoroughly biblical book, in that Harper examines numerous passages of scripture that touch on the need for shalom and the way God wants to make it available in and through the experience of people everywhere. But it is far more than just a commentary on the biblical text. Harper draws on her personal experience of abuse and loneliness, as well as current events and historical vignettes, to illustrate both the need for shalom and the hope and prospect that it can be a reality.

In short, the “very good gospel” she writes about is the way life is to be lived in the kingdom of God. As she puts it,

For persons who self-identify as Christians, there are two main options for thinking about the future. In one scenario, the influence of “Christian” values declines and the culture sinks into a pit of depravity and hedonism until finally (and soon) God intervenes, Jesus returns, and the earth is subjected to an apocalyptic judgment that purges evil and destroys the enemies of God, including all those who never believed the “gospel formula” as evangelicals preached it.

There is another scenario, however, in which, while there are struggles and pain in the world, and injustice and inequality have not been overcome, the prevailing culture is not becoming more decadent and is not sliding into an abyss of despair. Rather, in this scenario, hope energizes the people of God who understand that the message God’s shalom can restore relationships at every level of human interaction and can enable responsible use of and care for the earth and its resources. This is the vision for the future to which Lisa Sharon Harper’s articulation of the gospel applies.

Is there a source of hope that broken homes can be mended, that social and economic and racial inequality and injustice can be addressed and corrected, that nations can live together peacefully, and that the good earth can be responsibly cared for so that its beauty and resources can be appreciated for generations to come? Yes there is. It is the message of God’s shalom, most effectively illustrated and enabled through the life of Jesus. It is the gospel that we are privileged to experience and give witness to, both as individuals and, even more importantly, in the community of Christ-followers.

As Lisa Sharon Harper writes in closing her most excellent book,

There is a way back to shalom. It is the way of God, demonstrated through the person of Jesus and made possible through his death and resurrection. This is the good news. This is the very good gospel.

Note: This is the fifth in a series of fourteen special posts for Lent 2017. Each post references a different book, mostly recent works that I have found helpful and encouraging for my life pilgrimage, especially in light of major changes in my thinking and beliefs in the past decade or so. To read the introduction to the series that I posted on Ash Wednesday, click here. The posts follow the introduction in sequence and will generally be published on Tuesdays and Fridays through Good Friday, April 14.

1 thought on “A Little Farther Down the Path: The Very Good Gospel”