I served as a minister in the Free Church tradition for more than thirty-five years, first as a Baptist then as a non-denominational evangelical then as a Mennonite. For all of those years, I believed and taught that the benefit to be derived from baptism and communion (also called “the Lord’s supper,” but never “the Eucharist”) was in their value as powerful symbols of “spiritual” truths.

Baptism symbolized a believer’s faith in Christ as Savior and Lord and the personal commitment to follow Him as a faithful and obedient disciple. Communion symbolized the sacrifice of Christ in His crucifixion—His broken body (the bread) and His shed blood (the wine, or more likely grape juice). Both these practices represented something else. They were beneficial to the degree that a Christian knew what they stood for. They mainly functioned as “object lessons,” pointing to a spiritual reality but without value in and of themselves.

About seven years ago, I came to a different understanding of God’s purpose in these acts and why Jesus made it clear that they were to be practiced in the church until His return in power and glory. I became a sacramentalist.

A “sacrament” is an outward and physical expression or manifestation of an inward and spiritual touch of God’s grace. A sacrament does not merely symbolize or represent something that God has done or that we have done. A sacrament is something that God does. It isn’t the fullness of what God has done or is doing. But it assures us that God is doing it, and He is doing it through the physical experience of the sacrament.

As I now understand these practices, baptism is not merely symbolic of my faith and my commitment to live for Christ. It is the physical expression which assures me that I have been joined to the body of Christ, the church, and am now a recipient of the blessings and benefits of the New Covenant. 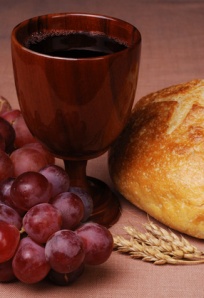 Communion (or “the Eucharist,” which is simply the Greek word for “giving thanks”) is not just a symbol of the death of Jesus on the cross. It is spiritual nourishment in and of itself. Without it, I grow spiritually weak.

I was reminded of the essential nature of these sacraments as I have been reading a most excellent book by Lesslie Newbigin called The Household of God: Lectures on the Nature of Church. Here is what Newbigin wrote about the sacraments in the chapter called “The Body of Christ.”

As baptism marked Jesus’ entry into His earthly ministry, so the institution of the supper marked the consummation of it. [Editorial comment: Wow!] It was His last act in the midst of His disciples while with them in the flesh. The final conflict with the prince of this world was at hand. The faith of the disciples was crumbling. …At that moment, when all was crumbling, He staked all upon a deed. He took bread and wine and told them, “Do this in remembrance of me.” …

When all landmarks were submerged in the flood of disaster, and stories of his (future) resurrection seemed but an idle tale, it was this utterly simple word, “Do this,” which rallied them and gave them the place at which the meaning of what had happened could be made plain. …

We have known forms of church life in which the sacraments were apparently mere signs, ancient customs to be preserved but not organs on which the church depended for its very life…; in which the Lord’s Supper was little more than an impressive illustration of the sermon, something that the church could do without and still be much the same. I mention this merely to remind you that, when this happens, the church becomes something very different from what is given in the New Testament.

When we allow ourselves to become more rational or more spiritual than Christ who gave us these sacraments, we violate the nature which God has given us and take upon ourselves more than we were meant to bear. When we

claim to possess a religion so spiritual that we can see past these visible signs to their (full) meaning,… the inevitable result is that we lose a certain simplicity and a certain awareness of ultimate mystery which belong to the very heart of man’s true response to God. …

What God has done for us in Christ, what we have to rely on, is much more than we can formulate in detailed statements or appropriate in conscious religious experience. The heart of our life in Christ must therefore be a sort of casting of ourselves upon those visible and tangible assurances which He has given us. He has sent forth His church, given to it His Spirit, and furnished it with these visible and tangible means of His presence.

In response to which, I can only say, “Thank You, Lord.”

4 thoughts on “The Surprising Satisfaction Of The Sacraments”