Last fall, I attended a conference in Washington, DC. I traveled between my (less expensive) hotel and the conference venue on the Metro, Washington’s subway system. I love riding the Metro, even though this once-state-of-the-art means of mass transit needs some upgrading and refurbishing. I get to the DC area so infrequently, however, that I need to re-learn the procedures for buying tickets, boarding the trains, reading the system map, etc., each time I visit.

On my last trip, I was returning to my hotel at the end of a long, tiring day. As I attempted to move through the Metro turnstile at Dupont Circle, the machine refused to accept my ticket. I reinserted it several times. The turnstile would not budge, and a line was forming behind me. I was flummoxed.

I was about to step out of the line, so that I could figure out why my ticket was not working, when the person behind me—a tall, smartly-dressed woman—spoke to me with a pronounced British accent.

“You’ve got it the wrong way ’round, surely,” she said.

“I’m sorry?” I replied, having not heard her clearly.

“Your ticket,” she said, pointing to the small card in my hand. “You’ve got it the wrong way ’round.”

She was right. I turned the ticket around, reinserted it into the machine, the turnstile opened forthwith, and I walked through. I turned to thank her for her assistance, but she had already been swallowed up by the rush hour crowd.

As I’ve been thinking about the relationship between the church and the Kingdom of God over the past few weeks, it occurred to me that God might very well be trying to say to us American evangelicals (and in a British accent, if Cecil B. DeMille is right), “You’ve got it the wrong way ’round.”

That is, we tend to think of the Kingdom of God, if we think about it at all, as something which the church employs as part of its program. Something the church makes use of in its effort to extend its influence and increase its membership.

But that is, as my subway ticket advisor put it so eloquently, “the wrong way ’round, surely.”

The church exists to serve the Kingdom, not the other way around.

I am genuinely pleased that more Bible teachers are using “Kingdom language” these days. I’m encouraged that more pastors seem to recognize the importance of the

Kingdom of God as the unifying theme of the Bible and as the most prominent element in the teaching of Jesus. When it comes to the relationship of the Kingdom to the church, however, and vice versa, the increased attention has yielded mixed results at best.

Many, if not most, pastors continue to see themselves as organizational administrators whose primary task is overseeing a program that will generate stable, and preferably increasing, attendance and adequate funding. To this end, the concept of the Kingdom of God can sometimes be employed as a means to spark enthusiasm or promote involvement.

That approach is, most decidedly, the wrong way around.

For most Christians, the word “church” is far more familiar, even if there is widespread disagreement over its precise definition and purpose, than the term “Kingdom of God.” And yet, as I stated above, the Kingdom is the theme which unifies the Biblical message, permeates the teaching of Jesus, and provides the most cogent and cohesive context in which to understand the nature and scope of genuine discipleship.

Before we are members of the church, we are citizens of the Kingdom of God. It is not the church that will outlast the present age and extend into the future eternity, it is the

It seems most instructive to me that, during the forty days between His resurrection and His ascension back to the Father, the topic about which Jesus spoke, apparently often, with his disciples was not the church, not the clergy office, not any religious structures or organizational administration. It was, you guessed it, the Kingdom of God.

3 After his suffering, (Jesus) presented himself to them and gave many convincing proofs that he was alive. He appeared to them over a period of forty days and spoke about the kingdom of God. 4 On one occasion, while he was eating with them, he gave them this command: “Do not leave Jerusalem, but wait for the gift my Father promised, which you have heard me speak about. 5 For John baptized with water, but in a few days you will be baptized with the Holy Spirit.”

6 Then they gathered around him and asked him, “Lord, are you at this time going to restore the kingdom to Israel?”

7 He said to them: “It is not for you to know the times or dates the Father has set by his own authority. 8 But you will receive power when the Holy Spirit comes on you; and you will be my witnesses in Jerusalem, and in all Judea and Samaria, and to the ends of the earth.”

Jesus told His followers to remain in Jerusalem following His ascension until they were “baptized with the Holy Spirit.” This prompted a question regarding the full restoration of God’s Kingdom, which they continued to believe would involve the elevation of Israel among the nations. Jesus’ response let them (and us) know that, however long we must await the full revelation of the Kingdom, when at last the King Himself returns to declare and exercise His rightful authority in the earth, until that time it is our privilege to be witnesses to this present hope and future glory. And it should be noted that Jesus told them this truth as a promise, not as a command.

Whatever the future Kingdom will look like, when Jesus reigns over it in love and grace and justice and peace, the evidence of that reality should already be visible in the life of the church which, as Lesslie Newbigin rightly noted, is to function as the sign, the 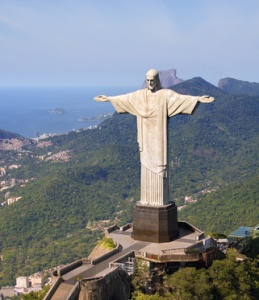 instrument, and the foretaste of the Kingdom of God.

That means that the first task of pastors, and of all those with responsibility for teaching God’s truth in the church, is to help the people of God understand what it means to live as though the Kingdom of God were already present and active in the world. For indeed, in the life of the church, it is.

Any other way of perceiving the relationship of the church to the Kingdom is the wrong way ’round, surely.

6 thoughts on “The Wrong Way Around”