Brennan Manning died Friday, April 12, at age 78. One of my students first introduced him to me around ten years ago. Not the man personally, but his writing. Specifically, to his book called The Ragamuffin Gospel. As I would soon find out, reading Brennan Manning was

very much like meeting him in person, for he poured so much of his soul into his writing that, every time I finished one of his books, I felt I had spent a week with the man himself.

In a sense, that is true of most authors who write essays and articles based on personal experience and reflection. But Brennan’s writing was different—more personal, more real, more authentic. His books were more than elegant, moving, first-person prose. They embodied his God-hungry spirit. His awe-filled awareness of the grace and mercy and love of God was embedded in what he wrote.

I’ll never forget my first encounter with Brennan Manning. Just a day or so after my student had suggested that I read The Ragamuffin Gospel, I happened upon the book as I browsed the shelves at Barnes and Noble. I opened the book to the first chapter and on the second page read these lines.

The institutional church has become a wounder of the healers rather than a healer of the wounded. Put bluntly: the American Church today accepts grace in theory but denies it in practice.

I read the rest of that chapter out loud to my wife in the car as she drove us home from town. Toward the end, I had difficulty seeing the words, as tears welled up in my eyes and 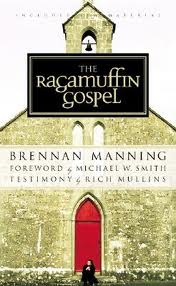 ran down my cheeks. My heart was both broken and blessed beyond measure. I had a fresh encounter with God, a new experience of grace.

Since that day, I have read many—probably most—of the books Brennan Manning wrote: Abba’s Child, The Signature of Jesus, Ruthless Trust, The Wisdom of Tenderness, The Importance of Being Foolish, The Furious Longing of God, and his final work, a memoir fittingly titled All Is Grace.

Brennan Manning was a flawed human being (like me) whom God used in marvelous, even miraculous, ways, because of his profound appreciation for the depths of God’s boundless love and grace.

When I heard that he had passed into the nearer presence of Christ, I felt a momentary wave of sadness. It seemed that a good friend had died. Almost immediately, however, my sadness gave way to joy. The last few years had been difficult for Brennan. His suffering is now past. He is home.

I am giving over the remainder of this blog post to the words of Brennan Manning. If you’ve never read The Ragamuffin Gospel, perhaps these lines, with which he concludes chapter one, will help you understand why those of us who knew him through his writing feel that we lost a good friend.

According to an ancient Christian legend, a saint once knelt down and prayed, “Dear God, I have only one desire in life. Give me the grace of never offending You again.”

When God heard this, He started laughing out loud. “That’s what they all ask for. But if I granted everyone this grace, tell Me, whom would I forgive?”

Because salvation is by grace through faith, I believe that, among the countless number of people standing in front of the throne and in front of the Lamb, dressed in white robes and holding palms in their hands (Revelation 7:9), I shall see the prostitute from the Kit-Kat Ranch in Carson City, Nevada, who tearfully told me she could find no other employment to support her two-year-old son.

I shall see the woman who had an abortion and is haunted by guilt and remorse but did the best she could, faced with grueling alternatives; the businessman besieged with debt who sold his integrity in a series of desperate transactions; the insecure clergyman addicted to being liked, who never challenged his people from the pulpit and longed for unconditional love; the sexually-abused teen molested by his father and now selling his body on the street, who, as he falls asleep each night after his last ‘trick,’ whispers the name of the unknown God he learned about in Sunday school; the deathbed convert who for decades had his cake and ate it, broke every law of God and man, wallowed in lust and raped the earth.

“But how?” we ask. Then the voice says, “They have washed their robes and made them white in the blood of the Lamb.”

There they are. There we are—the multitude who so wanted to be faithful, who at times got defeated, soiled by life, and bested by trials, wearing the bloodied garments of life’s tribulations, but through it all clung to the faith.

My friends, if this is not good news to you, you have never understood the gospel of grace.

“We thank you, Holy Father, for the life of Brennan Manning. Rest eternal grant to him, O Lord, and let light perpetual shine upon him. May his soul, through the mercy of God, rest in peace. Amen.”

1 thought on “Lessons From A Fellow Ragamuffin”