I had expected to meet Arthur at our favorite coffee shop on Monday afternoon for our regular weekly conversation, but he called mid-morning to ask if we could reschedule.

“I sold my table,” he told me, “and the guy who bought it wants to pick it up this afternoon. Ellie is working, so I need to be here when he comes.”

I think I mentioned that Arthur loves to work with wood, and I knew the table he was talking about. He had found it at an estate auction many years ago. It apparently had not looked like much when he bought it, but beneath several layers of paint and yellowed varnish, he

had discovered the most beautiful solid walnut.

He had buffed out all the gouges and rough spots with sand paper and steel wool, repaired a loose leg, and attached new drawer pulls and slide mechanisms. Then he applied several coats of tung oil by hand. The result was a stunning piece of furniture now worth ten times what he paid for it.

Before he and Ellie moved to central Ohio, they had lived in a house with sufficient room to display the table to its best advantage. It stood in their living room, beneath a large window, with pictures and flower vases tastefully arrayed upon it. There was no room for the table in the small apartment where they now lived, so it had languished in a storage unit for the past several years.

Arthur didn’t say why he was selling the table. He didn’t need to; I knew. He needed the money. Nearly five years of unemployment had exhausted his savings and now had apparently made necessary the sale of one of his most prized possessions.

I asked him if he needed help loading the table into its buyer’s vehicle, and he assured me he did not. We agreed to be in touch later in the week to set up a new time to meet. Then, late Monday night, I received an email from Arthur. Here is what it said.

Thanks for understanding why it was necessary for me to cancel our meeting this afternoon. The guy who bought the table had access to a friend’s truck for a few hours, so it seemed a small enough sacrifice on my part to adjust my schedule (and our weekly conversation) to accommodate him. After all, he gave me what I was asking for the table without any haggling at all.

This experience has taught me a lot… about myself, about the Kingdom, about poverty and materialism. For a start, I never would have thought that I could become so attached to a material possession. I am almost ashamed to think that I actually had tears in my eyes as I watched the guy drive away with my table.

I think that was for several reasons. Yes, I hated to part with something I had worked so hard to restore. But more than that, selling the table was just another painful reminder that, from a human perspective, my circumstances continue to deteriorate. I sold the table because I needed the money to pay my office rent. My wife has made it clear that we can no longer afford for that payment to come out of our general household budget.

I am thinking a lot about poverty these days. I just sent in our tax return, and, for the second time in the past four years, we earned too little to owe any income tax. Fortunately, we were able to supplement a meager income with money from our dwindling savings. But owing no income tax somehow leaves me with the feeling that I am not paying my own way. I know that is mostly irrational, but it is how I feel.

Some of the thoughts I’m having about poverty seem almost contradictory. For example, in the Sermon on the Mount in Matthew five, Jesus pronounces a blessing on those who are “poor in spirit.” In Luke’s account, however, it is simply “the poor” who are blessed. What’s up with that?

I think I know what it means to be “poor in spirit.” Poverty strips away your “safety nets.” You have no “fall back” position. The slightest downturn in your already-difficult 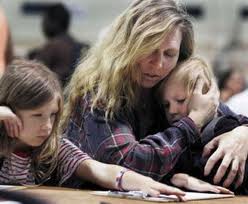 circumstances means that you will need to depend on somebody else to make your survival possible. I think that is what Jesus was talking about in Matthew. Somehow we need to understand our spiritual vulnerability and our utter dependence on the grace and mercy of God. There is nothing we can do to help ourselves. Like Brennan Manning said in his memoir, “all is grace.”

But that still leaves me confused about Jesus’ words in Luke. I am not poor, by the standard of most of the world, but even my circumstances make it difficult to know how poverty can be a blessing. It seems more like a prison.

I’ve never been to prison, thank God, but I imagine that the worst part of the experience is the loss of freedom. Prisoners have adequate food, they are protected from the elements, they get better health care than many people who work hard at forty-hour-a-week jobs. But

they have no real freedom. They can’t take a walk down the street. They can’t call up a friend and go to dinner or the movies. They can’t take in a concert or go fishing or plan a vacation. They are trapped by their circumstances.

That’s what poverty does. It so severely limits your options in life that you lose appreciation for the so-called “blessings of liberty” with which we are supposedly endowed. Most Americans ask questions like, “What’s for dinner tonight, Italian or Chinese?” The poor ask, “What will it be this week, food or medicine? Groceries or rent?”

I know that feeling more keenly than I ever expected I would. I have nine years of post-secondary education and two degrees. Still, I have been unemployed for nearly five years. It is not simply the lazy and the drug-addicted who fall into poverty.

I think I am beginning to understand why Jesus was so sensitized to the plight of the poor. And, more and more, I am coming to see the incompatibility between affluence and spiritual wealth. Jesus told more than one parable to illustrate the truth that material possessions almost invariably distort our ability to see life from God’s perspective because they cultivate a false sense of self-reliance and pride.

We’ve been talking a lot about St. Francis lately. Did you know (I’m sure you do) that he was known as “poverello,” which is Italian for “the little poor one.” See what I mean when I say that, if Francis were among us today, his focus and his agenda would probably mark

him as “emotionally and mentally unstable.” For my part, we need a lot more of that kind of instability.

Well, I’ve taken up enough of your time with these random musings. Thanks for reading them. If you have any response, you know that I am always happy to hear from you. I’ll be in touch later in the week. Take care.

1 thought on “The Arthur Chronicles—No. 15 (Poverty Is Prison)”