Arthur Lough’s office is located in a nondescript yellow-brick building next door to an elementary school and across the street from the public library. The neighborhood is a

mixture of small businesses and private homes, most of which appear to have been built at least fifty years ago.

The building, of a similar age, comprises two floors. The first floor, except for the space Arthur leases, accommodates the law office of the attorney who owns the building. Four small residential apartments occupy the second floor.

I arrived a few minutes before the appointed hour and parked along the street in front of the building. Arthur opened his office door to welcome me just as I stepped into the small foyer.

Arthur’s office is a single room, roughly twelve feet wide and twenty feet long. The walls are stucco, off-white and in need of painting. A dark green carpet covers the floor.

I laid my hat and coat across a comfortable-looking chair positioned beneath a large framed photograph of a statue of St. Patrick. The statue stands at the foot of the Hill of

Tara, north of Dublin, where legend says Patrick met with the High King of Ireland in the 5th century and explained the Christian doctrine of the Trinity to him, using the three leaves of a shamrock to illustrate.

Arthur and I had visited that very site on our trip to Ireland in 2006, and as I admired the print, he moved to a bookshelf behind his desk and took from it what looked like a small green and gold picture frame. He handed the frame to me, and I saw that, instead of a picture, it held two shamrocks, now dry and brown and shriveled, which Arthur had brought home with him from Tara.

“Care for a cup of tea?” Arthur asked, as he returned the frame to its place on the shelf.

I don’t know if Arthur was a tea drinker before his trips to England and Ireland, or if he developed a taste for it while he was over there. I do know that one of his frequent gripes is how difficult it is to find a good cup of tea in the States.

“I much prefer tea to coffee,” he said, “but it is almost impossible to find a decent cup of tea in this country.”

I mouthed those last words along with him, and he smiled. “I guess I’ve made that point before.”

“Well, the best coffee shop in the city, as you well know, is just three blocks from here. That’s why I only serve tea in this office. If you want coffee, we can take a little walk.”

He filled a mug with the steaming brew, I added milk and sugar, and we set our cups on a

small round table in the middle of the floor. Arthur lifted one of two arm chairs from in front of his desk and repositioned it at the table. He motioned for me to do the same with the other one. We were soon settled, small talk dispensed with, and, as Arthur sipped his tea, he was clearly waiting for me to broach the subject of the day. I was ready.

“So tell me, Arthur,” I began. “You have criticized the church for not doing its job well because it doesn’t know what it is supposed to be doing. Could you summarize what it is that you think should be the church’s primary task?”

“That’s simple,” he answered. “The church is the agent of the Kingdom of God.”

“And what exactly does that mean?” I asked.

“It means that the purpose for the church is to represent the Kingdom of God on the earth. Everything that the church does should reflect the values and character of the Kingdom.”

“And the Kingdom of God? Is that the same as heaven?” I asked.

“The Kingdom is not so much a place as it is a status, an existential reality,” Arthur said. Then he smiled broadly. “I say things like that every once in a while just to prove that I went to college.”

“What sort of existential reality is the Kingdom of God?” I asked.

“The Kingdom exists wherever God exercises His complete sovereignty,” Arthur replied. “It exists wherever God is in complete control. That was once the reality in all of the universe. Then the creation was corrupted by human sin. That set up a cosmic tension which kept getting worse and worse until God took on human form and, in the person of Jesus, His Son, came into the world to address and resolve the problem of sin once and for all.”

“But I see the effects and consequences of sin all over the place,” I protested.

“True enough. But now we know the end game. Jesus, the Son of God, died on the cross, rose from the dead, ascended back into the presence of the Father, and will one day return to the earth to establish His Kingdom in its fullest sense.

“In the meantime, the Kingdom of God already exists wherever and whenever a person acknowledges the truth of what Jesus accomplished, accepts the free gift of forgiveness 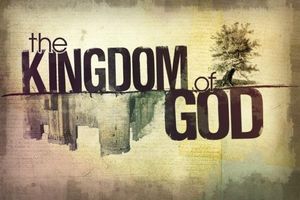 that God offers, and enters into a new relationship with God and with all other people who have likewise encountered the grace and mercy of God through faith in Christ.

“The world at large is still in rebellion against God. One day, Jesus will return to earth and will be acknowledged by all of creation as the creator God who deserves the adoration and loyalty of all His creatures.

“Until then, the Kingdom or rule/authority of God breaks into the world system every time a human being comes to faith in Christ and surrenders himself or herself to the will and purpose of God.

“The church serves as the setting where people who live under the authority of God come together to worship the God whom they serve and to encourage one another to live faithfully and consistently as citizens of the Kingdom of God. That’s what I mean when I say that the church is the agent of the Kingdom.”

“Is there someplace in the Bible where this is all spelled out?” I asked.

“But there is a paragraph, in Paul’s letter to the Colossians, which offers a pretty succinct summary. It’s in chapter one.”

Arthur stood up, walked over to his desk, picked up the Bible lying there, and thumbed through it until he found the passage he wanted.

“Here it is,” he said. “Colossians one, verses fifteen through twenty.” Then he began to read aloud…

15 The Son is the image of the invisible God, the firstborn over all creation. 16 For in him all things were created: things in heaven and on earth, visible and invisible, whether thrones or powers or rulers or authorities; all things have been created through him and for him. 17 He is before all things, and in him all things hold together. 18 And he is the head of the body, the church; he is the beginning and the firstborn from among the dead, so that in everything he might have the supremacy. 19 For God was pleased to have all his fullness dwell in him, 20 and through him to reconcile to himself all things, whether things on earth or things in heaven, by making peace through his blood, shed on the cross.

Arthur paused, laid the open Bible back on his desk, leaned against the desktop and looked as though he were in deep thought. After a moment he said, “That pretty much says it all.”

“If a church does not recognize its role as the agent of the Kingdom, it cannot possibly fulfill its purpose in the world,” he went on.

“It’s like Lesslie Newbigin said.” Arthur shuffled through a pile of books and papers on his desk until he found a small pamphlet with a blue cover.

“Have you ever read this?” he asked me, holding the pamphlet so that I could read the white printing on the front. It was a booklet called Mission in Christ’s Way, and the author was the great British theologian, Lesslie Newbigin, who spent much of his life as a missionary in India. Arthur had mentioned him before, and I knew he regarded Newbigin as something of an authority on the relationship of the church to the Kingdom of God. I had read the book which Arthur now held up, but it had been many years.

“It’s like Newbigin said,” Arthur repeated. Again he thumbed through the pages, found the portion he wanted, and said, “It’s here on page twelve.” He then  read aloud from the booklet.

“The church has a cosmic purpose,” Arthur said as he closed the little book and laid it on top of his Bible. “Can you understand now why I get so frustrated when I see churches ‘dumbing down’ this cosmic purpose for which Christ brought the church into existence in the first place?”

“And it is the responsibility of the church’s leadership to make sure people understand that cosmic purpose. So if the church is confused about its purpose, it must be true that leadership is not doing its job very well.”

Arthur was energized. I could tell he was about to launch into a monologue on church leadership, but I needed a break.

[Postscript: The Newbigin booklet referenced above is out of print. A copy may be obtained online (as a .pdf file) for personal use. To download it, click here.]