Yes, you read that correctly. No, I am not so addled by senility that I don’t know what year it is—at least not yet. And no, this has nothing to do with the Mayan c 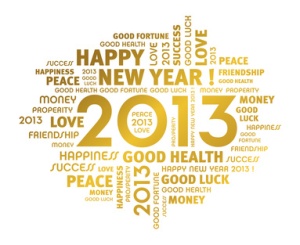 alendar prediction of the end of the world in 2012. I’m just looking ahead, with eager anticipation, the way a college student looks forward to homecoming weekend just before a Western Civ exam on Friday. There’s a big uncertainty immediately ahead, but there is also a promise of something really great beyond that.

I am making some plans for 2013. Yes, I’ve heard the old saying that, if you want to make God laugh, tell Him your plans. I try always to follow the injunction in the book of James…

13 Come now, you who say, “Today or tomorrow we will go into such and such a town and spend a year there and trade and make a profit”— 14 yet you do not know what tomorrow will bring. What is your life? For you are a mist that appears for a little time and then vanishes. 15 Instead you ought to say, “If the Lord wills, we will live and do this or that.”  (James 4:13-15 ESV)

And so, I readily concede that my plans for 2013 will only come to pass if God wills. Still, what I have in mind will require considerable lead time for preparation, so it is not at all too early to begin planning and preparing.

There is another reason I am looking ahead to 2013. By then, I expect that some of the uncertainty clouding my thoughts in January 2012 will have dissipated and some things that are unclear now will have been resolved, one way or another.

I wish I could report that in 2012 all our uncertainty gave way to perfectly focused clarity. Alas, it did not happen that way. Please read on from my 1-4-12 post…

For example, I fully expect that, by this time next year, we will have a pretty good idea whether or not St. Patrick’s Anglican Church is going to become a reality. If, by January 2013, God has not brought together a core group of committed believers to be the “seedling” for this church which we are asking Him to plant in the vicinity of OSU, we should probably take that as a sign that it is not going to happen. In that event, we will need to conclude that God’s plans are the not the same as ours, and His plans trump ours.

St. Patrick’s did not become a reality in 2012. No core group materialized. Nobody stepped forward to say they sensed God leading them to own the vision along with us. Nobody sensed a divine urging to make the kind of commitment that a venture of this sort requires. Was God trying to tell us something? If so, what was it? That it’s time to quit? That we need to re-focus our energies in another direction?

Or was God simply letting us know that His timing is not our timing? As I noted in the post which I published about a month ago, “the vision yet abides.”

In my post from January 2012, I did have the good sense to acknowledge that…

(i)t is completely within the power and the providence of God to overcome the obstacles that loom large in 2012…  Whatever comes about with regard to St. Patrick’s, God is sovereign, and His will is perfect. May His name be praised forever.

I then turned my attention toward 2013. In that regard, I wrote…

I am looking forward to undertaking two pilgrimages next year. The first, tentatively scheduled for May, will be a pilgrimage to Ireland, to sites related to the ministry of St. Patrick and Celtic Christianity…  The second…, which I hope to undertake in the fall,… is El Camino de Santiago, the Way of St. James, in northern Spain.

At the moment, it looks like either one or both of those pilgrimages will need to be rescheduled for a later date. I remain unemployed, and all available financial resources, which are even scarcer now than a year ago, will no doubt be directed to areas of need a bit more urgent and practical than traveling to Ireland and Spain.

You may be wondering about the title of this post—”2012 Was A Rainy Walk.” It comes from a story out of my early teen years with which I concluded my January 2012 post. Here it is again.

When I was a boy, my family lived on a small “farm” near Charleston, WV. We called it a farm, and there was enough arable land amid its 75 hilly acres to enable us to plant a large garden, raise a few chickens and a couple of hogs, along with a milk cow and a steer or two for beef. We weren’t self-sufficient, however, and my dad worked full-time as a printer for the Charleston newspaper. Our property lay just over a mile beyond the end of the paved road, and the rutted dirt road that connected our farm to the main road crossed a meandering creek four times. There were no bridges; we had to ford the creek at each crossing.

This meant, of course, that when rainfall (or snow melt) caused the creek to rise, which happened several times a year, we would need to cover that mile on foot, since the creek would be too deep to ford with a vehicle. So, on those mornings when the creek ran high, my dad and I would set out, generally while it was still dark, to walk that crooked mile between our house and my grandparents’ house, located near the end of the paved road.

I hated that long, dark walk at 5:30 in the morning. In my memory it is almost always raining and I am being slapped in the face by a wet tree branch as I try to stay close behind my dad, who is leading the way. The only thing that sustained me on those dark mornings was the anticipation of what awaited me at my grandparents’ house… a cozy fire in the living room stove, the smell of coffee brewing in the kitchen, and my grandmother’s cheery greeting. I could get through almost anything on my way to that expectation.

Along the way, my dad carried a lantern which illuminated a circle about ten feet in diameter. Far enough ahead to be able to take the n 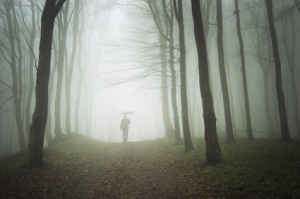 ext step, but no farther… until, of course, he took that step, then the glow of the lantern enabled us to take the step after that. And so it would go. One step after another. Just enough light to take one step at a time. Then another. Until finally, we could see the lights of my grandparents’ house, twinkling their welcome in the distance.

That’s the way I see the future. 2012 looks like it might be a rainy walk. So far, the light is sufficient for one step at a time, no more. But 2013 holds the promise of good things to come. I can smell the coffee already.

2012 was indeed a rainy walk. Truth be told, it’s still raining. The aroma of coffee is not as strong as it was a year ago. Sometimes I wonder if those points of light are actually a mirage and not my grandparents’ house after all.

Still, my heavenly Father is walking ahead of me, leading the way. It’s often dark, the path is muddy, the trail obscured. I can never see more than one step ahead. Then again, how much more do I need?