There are so-called Bible scholars who want us to believe that the Gospels were written by the early church some 200 years or more after the death of Jesus, and that they should not be read as historical accounts of events that actually happened. According to this view, the Gospel writers never intended that the stories about Jesus would be taken literally. The point of the stories was to deepen our appreciation for Jesus the Teacher, in much the same way that the story of St. Patrick driving the snakes out of Ireland enhances his reputation as a devout and effective Christian evangelist.

If I was ever tempted to read the Gospels that way—and I never have been—there is enough evidence in these seven short verses from Mark 4:35-41 to prove the error of that view.

For instance, consider some of the unnecessary details that do nothing to advance the point of the story, but do give it the “ring of truth,” since they are the kind of information you would expect from an eyewitness (and we believe the Gospel of Mark is essentially Mark’s record of Peter’s recollections).

These men feared the storm would swamp their boat, and they would drown. What did they expect Jesus 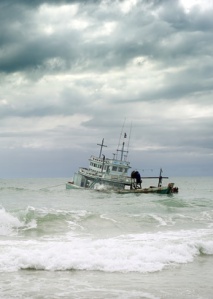 to do about it? Commiserate with them? Assure them that He really did care about their situation, and lead them in singing “Nearer, My God, To Thee” as the ship sank?

No, apparently they believed that the man who had performed the miracles which they had observed with their own eyes could do something miraculous to keep them from dying.

And He does. He speaks—two words in Greek, three words in English—and the storm is over. And the disciples, who had asked Him to do something, are amazed and terrified when He does. Somehow I think that, if this were a story made up by the church, it wouldn’t end like that.

So… what is it about what Jesus does that causes His disciples to respond as they do? I think the key is in the sentence: Then the wind died down, and it was completely calm. Here’s what Timothy Keller writes about this:

Jesus spoke to the storm as you would talk to an unruly child. (But) the more astonishing thing is that the storm obeyed like a compliant child. “Then the wind died down, and it was completely calm.” That sounds like redundancy until you realize that Mark is talking first about the wind and then about the water.

“Completely calm” could be translated “dead calm.” Have you ever seen water that is smooth as glass, no waves at all? You can see your face in it. When the winds stopped after Jesus’s rebuke, that could have been a coincidence. But if you’ve ever gone on an ocean cruise or lived on the shore, you know that even when the winds stop and the storm ends, the waves keep pounding for hours afterward. Yet when Jesus said, “Quiet! Be Still!” not only did the winds die down, but the water instantly went dead calm.

That’s what “terrified” the disciples. They called on 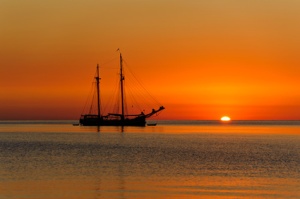 They would have been happy if the storm had subsided just enough to keep the water from pouring into their boat. All they really wanted was for Jesus to do enough to keep the boat from sinking. But no. Jesus didn’t stop there. He did so very much more. More than was strictly necessary. More than they had really asked Him to do. More, even, than they had any reason to expect.

And why not? After all, He was God. And here is what Paul says about God, in his letter to the Ephesians, chapter 3.

20 Now to him (God the Father) who is able to do immeasurably more than all we ask or imagine, according to his power that is at work within us, 21 to him be glory in the church and in Christ Jesus throughout all generations, for ever and ever! Amen.

That’s what God is able to do… “immeasurably more than all we ask or (even) imagine.” And Paul wasn’t just blowing smoke when he wrote those words. He had evidence.

Back in Exodus 14, as Moses led the Children of Israel out of 400 years of bondage in Egypt, they came to the Red Sea, and it appeared that was the end of the road. But then God stepped in, sent a mighty wind, and opened a path through the water. The Israelites were so happy they now had a way of escaping Pharaoh’s army, they would no doubt have been willing to slog through mud up to their knees. But here’s what the text tells us:

21 Then Moses stretched out his hand over the sea, and all that night the Lord drove the sea back with a strong east wind and turned it into dry land. The waters were divided, 22 and the Israelites went through the sea on dry ground, with a wall of water on their right and on their left.

Then, remember the story of Hananiah, Mishael, and Azariah… better known to us, perhaps, by their Babylonian names—Shadrach, Meshach, and Abednego. Three young Israelite men who had been taken captive by Nebuchadnezzar, king of Babylon. The king insisted that they renounce the true God and worship a golden idol that he had made. The boys refused, and the king had them thrown into a super-heated furnace.

Once again, these guys would have been thrilled to escape with their lives… maybe with their eyebrows singed or even a few minor burns here and there. But again, here is what the text says in Daniel 3.

24 Then King Nebuchadnezzar leaped to his feet in amazement and asked his advisers, “Weren’t there three men that we tied up and threw into the fire?”

They replied, “Certainly, Your Majesty.”

25 He said, “Look! I see four men walking around in the fire, unbound and unharmed, and the fourth looks like a son of the gods.”

26 Nebuchadnezzar then approached the opening of the blazing furnace and shouted, “Shadrach, Meshach and Abednego, servants of the Most High God, come out! Come here!”

So Shadrach, Meshach and Abednego came out of the fire, 27 and the… royal advisers crowded around them. They saw that the fire had not harmed their bodies, nor was a hair of their heads singed; their robes were not scorched, and there was no smell of fire on them.

And finally, remember the story about Jesus feeding the multitude… the only miracle recorded in all four of the Gospels. The crowd had been so caught up in Jesus’ teaching that, as evening approached, they realized they had not eaten all day, and Jesus’ disciples were concerned. They asked Him to send the people home, but Jesus told them to give the people some food. The disciples said they couldn’t do that because it would cost too much. So Jesus took a boy’s lunch of five small loaves of bread and two fish and caused it to multiply so that everybody in the crowd could have something to eat.

Again, they would likely have been happy with a snack… just enough to take the edge off their hunger so that they could continue to listen to Jesus teach. But again, here’s what the text says in Mark 6.

39 Then Jesus directed them to have all the people sit down in groups on the green grass. 40 So they sat down in groups of hundreds and fifties. 41 Taking the five loaves and the two fish and looking up to heaven, he gave thanks and broke the loaves. Then he gave them to his disciples to distribute to the people. He also divided the two fish among them all. 42 They all ate and were satisfied, 43 and the disciples picked up twelve basketfuls of broken pieces of bread and fish. 44 The number of the men who had eaten was five thousand.

In every one of these cases, God did more than the people involved could even have imagined. So, the question is not, “Does God have enough power to do something in my situation that will meet my need and prove to me that I have no reason to be afraid?” Of course He does. He has enough power, in every situation, to do immeasurably more than we can ask or (even) imagine.

So that leaves us with one unavoidable conclusion. If God does not respond to our repeated cries for help… if He doesn’t step into our situation and calm the storm… or provide a job… or heal the disease… or tear down the obstacles that are preventing us from making “progress”… it must be that He simply chooses not to. It must be that, in His infinite wisdom, He has determined that, in this situation, for the time being, it is better for us to wait.

I’m going to close this blog post with a prayer. The words of this prayer were written by a man named Ken Gire. Even though I didn’t  write it, it says what I want to say to God today, and I hope it will voice your prayer, as well.

Dear Master of the Wind and Waves,

When the sudden storms of life come crashing over us with their fierce winds and frothing waves, please help us. We have seen enough storms, Lord, to know how quickly peaceful circumstances can turn into catastrophe.

We have seen riches evaporate overnight and jobs vanish into thin air. We have seen the faithful lose faith. We have seen happy marriages with hopeful beginnings end up on the rocks of infidelity. And we have seen prodigals blown off course to sink in a sea of sin.

Yes, Lord, we have seen a lot of storms. Too many of other people’s to think they can’t touch us. To many of our own to feel critical or proud or unsympathetic.

Lord, some of us are going through some tempestuous times right now. Help us to see You in the midst of the storms—You who rule the wind and the waves with only a word.

And help us to see that, no matter how devastating the storm that sweeps over us, You do care if we drown. Help us not to be hasty in judging Your concern for us during those times when our lives seem to be sinking and You seem to be asleep in the stern.

Thank you, Lord Jesus, for being there during our individual storms. And when uncertain seas unsettle our faith, turn our attention to You so that the tempest in our souls might be quieted and made still.

4 thoughts on “More Than You Might Imagine (Part Two)”